So, my Pi arrived today.  It is a tiny thing indeed! 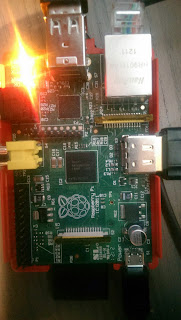 I set it up at work.  Was good and didn't get too distracted, but I did load up Debian and have a play.  It's not quick for sure - loading Incentivated's website took about 30 s, and the CPU was at 100 % for most of that time, but that's to be expected I guess.

After a while I tried out the Arch Linux Arm version, which doesn't by default have a GUI, but seems pretty nice. I'm going to stick with that for now.

Now I've got it home, I've got it running on my desk with Arch Linux, bought an HDMI-DVI adaptor and a cheap HDMI cable, which works fine.

I've rebuild the Arch Linux image with larger partitions - I was lazy and did it with a VM running Ubuntu and gparted - 6 Gb root partition, and the rest of the 16 Gb card as data (I'll be symlinking /home and /var).

I've been brainstorming things to do with it.  Ideas so far include:

Anyway, enough talking, back to some doing!  I'll post more here about the media centre idea soon.
Posted by Unknown at 9:02 PM